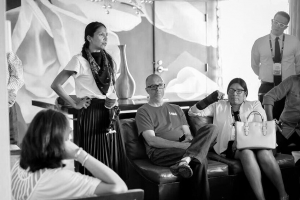 In early September, Indian Country Today Media Network called it quits — a startling revelation to all who either patronized the website and magazine or were contributing writers.  That’s because ICTMN told no one that they were having financial problems, forcing their sudden “hiatus”.
Since then, there has been a steady dialogue that has emerged in the absence of ICTMN, a publication that many agree was imperfect, but also, was better than what currently exists in the media ecosphere:  a mostly aggregated climate of news content generated from outside journalists explaining the Indigenous narrative.
In this special relaunch of Still Here, we’re taking a look at the State of Indigenous Journalism.  It’s in trouble.